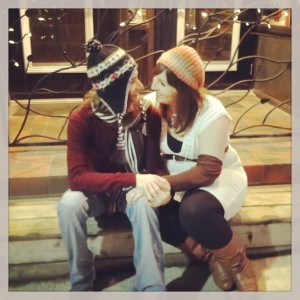 Bio: Getting to know Azalea’s music is getting to know the heart of Benjamin & Mia Hackett, the husband & wife duo hailing from Hamilton, Ontario. The way their voices blend together in song is a beautiful picture of how they come together in life. Before meeting one another, Benjamin & Mia worked hard at their craft but always felt an element was missing. After one songwriting session together, they realized that the missing element was each other. Apart, their efforts fell short of what they had hoped to express musically, but together their sound blossomed into something beautiful, the sound now known as Azalea.

Azalea’s 2010 release, “Coffee & Kisses EP, has been featured in many prominent music magazines and has had a great response from college radio across Ontario. The album was also nominated and placed in the top three finalists for Recording of the Year, Rock Recording of the Year, Instrumentalist of the Year, and Producer of the Year at the 2010 Durham Region Music Awards. Since then, Azalea has been streamlining their folk-tinged pop sound by crafting songs that tug on your heart’s strings with haunting melodic and harmonic lines reminiscent of The Civil Wars and Ryan Adams, giving this duo an Alt Country appeal.

Azalea’s live shows feature a beautiful blend of intimate & reflective pieces that pull the listener in emotionally, as well as some supercharged numbers that feature exciting live looping. Their on stage chemistry is undeniably adorable – Azalea’s “cute factor” has become a distinguishing feature that transcends their live performances and is echoed in their lyrics and musical arrangements.

With a knack for creating a romantic and magical mood, Azalea has found themselves providing the musical backdrop for several wedding ceremonies in the past year; something that gives them great joy.

Benjamin & Mia’s church background has allowed them to move beyond the local music scene into a realm very close to their hearts – worship.  They currently function as worship leaders at their local congregation and across the Greater Toronto and Hamilton Areas, an aspect of their career that has long been on their hearts.

Azalea is currently working on new material and continues to perform throughout Ontario. Whatever the setting, you’ll find them be genuine, joyful, and full of life – always looking for their next adventure.