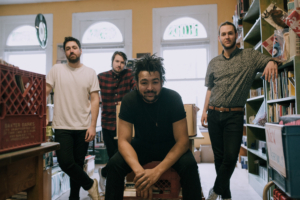 Texas King is Your Ride Home; it’s what you listen to when you get on the bus, when you get off work and you’re driving home listening to the radio. Texas King are a live band that create a safe space for everyone to have a good time – a rock band that sweats charisma, the life of the party – but it’s not about Texas King, they’re not the hero – it’s about the fan – this is about their journey, what Texas King offer is the soundtrack to finding their way through life, their way home.

Circa 2013; Jordan, Phil, Colin, and Melvin came together in London, Ontario to start putting together the hooks and high-kicks of what would eventually become their 2017 debut release Circles. Independently released, the lead single Boomerang quickly became a fan favourite at shows and debuted on the Canadian rock charts at #14. The band toured relentlessly in 2018/19, criss-crossing the country opening for bands like The Sheepdogs or with friends in Royal Tusk, dropping into New York/Los Angeles/Chicago supporting Last Dinosaurs on sold out shows, and eventually finding their way through America and back across Canada with Big Wreck on a 4-month tour at the end of 2019 – all culminating with a sold-out hometown headline show to celebrate.

Over that time on the road and into last year the guys shared a series of singles; Greatest Mistake,
Giants, and Chandelier – which followed Boomerang onto the rock radio charts, peaking at #39 and
currently tracking a half a million streams on Spotify.

As we look back at the tread marks on the highway, all roads have led here – where we look out onto the horizon, the fog of Covid-19 slowly starting to clear, and the band midway through a six song EP titled Changes with the first single Not Myself having just cracked top thirty at Canadian radio. With the release date (December 2, 2021) deep in the year – the road ahead to tour and play shows is being paved – the map remains the same, unfolding along the creases, songs ready to claim their place on your playlist, on the radio, Texas King is what you listen to, to get you where you need to go.

MotherFolk has been revered as “The best band ever” by almost all of its current members. What started in 2014 as a writing project between two college friends has grown into a phenomenon that has captured the hearts and souls of dozens of people all over the world,

With three full lengths and a few singles under their belt, Motherfolk has toured heavily all over the country and has made a name for themselves with their high-energy performance. Currently, they continue to tour regularly and are spending the time in between in the studio working on what’s next.

Don’t sleep on this band, sleep on a bed!

Loviet – If 2020 was a rollercoaster, 2021 is the theme park. It’s the only way rock-pop singer-songwriter, Loviet, can explain it. The quick ride of last year’s three-song EP “Everyone Knows the Thrill When it’s Over” turned out to be just a taste of the expansive set her upcoming fall album has to offer. With this second release, she boldly introduces sound versatility to the speakers, lyrical variety to the ears and a burgeoning songwriter to the crowds.

Loviet’s kept her signature, shimmery hooks and tell-all emotions rooted in party sweat, but mastered a cathartic flavour in all seven songs she wrote, sang and produced during 2020’s planet-wide period of self-reflection. Led by the lead single, “Dullshine”, the album’s romanticized teen memories, inner battles won and lost, and existential sparring with the future easily duet with classic 90’s grunge and 80’s synth on the side. The whole album’s nostalgic thread pulls together a generational gist wrapped in poetic power that anyone can relate to.

As her body of work grows, it’s clear that Loviet’s here to take up some serious space on the edge of pop’s dancehall mold. A good measure of fuck-it undertones live in her exhales to help counterattack the industries plastic and emphasize her see-through approach to real stories and gutteral songs. It’s a deliberate move by an artist who wants to see where things can go before they close the gates. This is a tour of her theme park after all. – writing credit: Dani Kreeft

– As of September 22, 2021 at 12:01AM all restaurants, bars, cafés, venues & gyms are required to ask for proof of a 2nd vaccination dose. You can download your receipt of a 2nd vaccine dose via the Provincial Government website and it can be presented via your mobile device. This along with your ID will be required at the door.

– As per government regulations all Artists, Musicians, Performers, Venue Staff, Patrons and Show Attendees must wear a mask unless at your seat / booth. This includes using the washroom facilities.

– Show is seated as the venue is required to maintain distancing between show attendees during all events. To reserve a table (for up to 4 people) or section (for groups of 4+) purchase Advanced Tickets.

– Limited space available so make sure to show up early to claim your tickets!