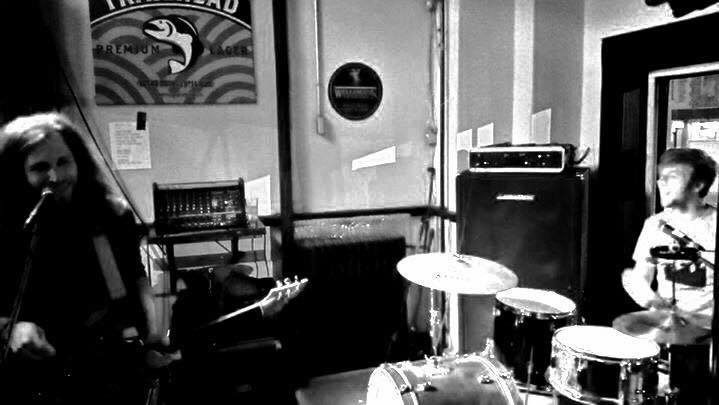 For the whole of Saturday night, I was posted up at Jimmy Jazz for the White Girl Wasted/Bike Thiefs/Lipstick Fiction show. The gathering of these bands and their people brought to us an evening of high energy and high humidity, also. For those who weren’t there, it was a great night, and for those who were, there is a good chance that we swapped sweat at some point, and I’m thankful; it was nice to meet ya!

Jimmy Jazz is my favourite bar that I’ve ever been to more than once. For me it’s a Guelph staple, in that when friends from out of town visit me, I’ll certainly bring them there – the dive-bar types, anyways. It’s just my favourite bar. Anyone who knows me knows that well, and anyone who doesn’t has probably seen me there before. I live nearby, so I’m there pretty often, and it’s also where I met a lot of my really good friends. One day I’ll be able to call it “my old stomping grounds,” but for now it’s just where I go. A few of the reasons for this being my favourite bar entail a ~$5 menu-till-midnight, a pool table that you’ll likely have to fight me for, a cozy back patio, 365 days of service (seriously) and no cover, ever! Saturday night was especially sweaty, and due to the turnout in support of the bands and the size of the room, it was a bit difficult to find an ideal spot to sit. Alas, I found my corner and my buddies, and I began scribbling my night away. It was hot in there, also. Like, really, really hot in there. All of the beer mugs had been occupied before 11pm, so that everyone could stay refreshed… or unaware of their temperature – either way, people were there and drinking, down for a sweaty show. There was merch laid out across the pool table, and Lipstick Fiction’s glitter board made my game last night seriously extravagant. I didn’t pick anything up that night, but I was wearing a White Girl Wasted shirt, I think one of the last ones ever made.

Lipstick Fiction is a “very short, but very loud” 4-piece from Cincinnati. Sporting 2 releases, a full length album and an EP, they are a dynamic, chewy, new wave punk ensemble with vocals that will blow you away. Check out their website below. I found their sound to be most easily compared to a mix between the fast-paced, riff-heavy Iron Maiden and the angsty and explosive Hole, somehow with a voice slightly resembling Eddie Vedder in its clarity. I think they played 6 songs. It could have been 5, could have been 7…. the spaces between songs were fuzzy and filled with feedback which I really enjoyed, but on some occasions I’m not sure if one song was actually two, or if I was experiencing a two-part track’s buzzing intermission. The band said a few words throughout the set, letting us know that they were impressed with their first trip to Canada, and that someone had been kind enough to offer them directions on their way here. Jimmy Jazz as previously mentioned is a small space, with a corner/stage for bands, which I imagine puts a lot of pressure on performers to use their space well, or to expand into other parts of the bar instead (which is more White Girl Wasted’s thing…) Their front-woman, indeed, very short and very loud, moved out of the small corner-stage to hop around and ride out some heavy riffs, killing some time between wails of impressive power and pitch. The drummer was doing well for his allotted space, as well. He was enjoyable to watch. They nailed the power stance and swayed with the crowd during fast and heavy breakdowns, you know, the ones that resemble chaos and doom as it comes running towards you. I mean that in the best way, I really enjoyed their set. The singer’s yells and outbursts of calculated frustrations were at times countered with dreamy ooh’s and ah’s, laid over thick, groovy bass riffs. A series of long screams at the end of their set drew everything together and spit it out at me. I was impressed with their performance.
https://lipstickfiction.bandcamp.com/

Bike Thiefs are a self-proclaimed “grammatically inept 3-piece rock band” born of Mississauga. With a matter-of-fact lyrical style and punchy, upbeat highs and lows, the trio very quickly became a band that I consider myself a fan of. Four releases are available on Bandcamp, and Ontario show dates for as soon as this Saturday are accessible below, also. Often compared to the likes of Joy Division, Talking Heads, The Pixies and early endeavours of Weezer, this band is totally up my alley, and I’m stoked to have seen them this past weekend. The band delivers a quirky, beat-focused backbone with fits of speak-sing story-telling laid over healthy pops of distortion, hosting hard pauses for some fuzz before roping the listener back into the craziness and speed of the track. It’s an engaging experience, almost as if to see if we’re still listening, and I think it would be difficult or at least unpleasant to divert attention from such an eccentric, energetic performance. While the sound was quite compact and crunchy, the lyrics and storytelling through them was my favourite part, and the way the singer moved his hands in expression of what looked like release of tension was relieving to watch. I really had a good time, and the audience did, too… It got a little crazy at the end of it, though nothing could prepare me for the headliner, but people were dancing around pretty heavily, knocking over some of the stands and getting pretty close to the artists. They played 9 songs, the closer being a Mclusky cover, which was super fine with me. I enjoyed the heck out of this set, and they’re in my library now. Bike Thiefs’ next show is scheduled for August 16th, in Washington, DC.
https://bikethiefs.bandcamp.com/

White Girl Wasted is a noisy 2-piece grown out of Guelph and Waterloo, making “music for sensitive pricks.” Two albums are available online, which I listen to on Apple Music… (not a paid plug, I swear.) The short, spunky fits of frustration and anxiety are incredibly filling and don’t at all resemble the things I fear about 2-piece bands. Genuinely I was impressed with the fullness of the sound and the lyrical depth, which was delivered to me by a small drum kit, an electric guitar, and two mics; the perfect recipe for this kind of calculated chaos. Some songs gave me a vibe of The Hives, and their communicative stage presence reminded me more of Ozzy and Sharon – that’s a joke – but the energy was high and comfortable, as the two were meeting each other halfway and cooking up some tunes for whoever would listen. From the spot right in front of the stage that isn’t actually the stage, the riffs were thick and the screams were loud – the heaviness and noisiness of this band being hand-fed to the audience. Also, beers were being hand-fed to the band… and this was before craziness ensued, which resulted in one member sitting in a recliner with a bag of frozen fruit on his groin later. The front-man, Derek, (no relation to the fruit-groin guy) is a good friend of mine and also completely crazy – with respect to his stage presence, that is… Or anywhere-but-the-stage presence, which is definitely more accurate to say. I watch him lose control of his body every time I go to his shows with other bands like The Story Of. (playing Dstrct for Kronik Fest this Saturday June 2nd) and Frenemy, and it seems like a surge of release, which makes the music that much more fruitful in my experience. For an encore performance, which isn’t a typical occurrence at Jimmy Jazz shows, I made my way to the crowd that had begun to throw down pretty heavily and nonsensically, I even saw a lit cigarette, how edgy. To close the show, Derek made his way through the bar while still playing guitar, jumped onto the two front tables and came tumbling down when one of them broke and kind of folded into itself? It was gnarly. I got beer on my vans, which was even edgier. If you’re interested in being part of this craziness, WGW is playing Jimmy Jazz again on June 22nd with The Namedroppers, another Guelph band, for their album release party. I highly recommend seeing them, it was a great show.