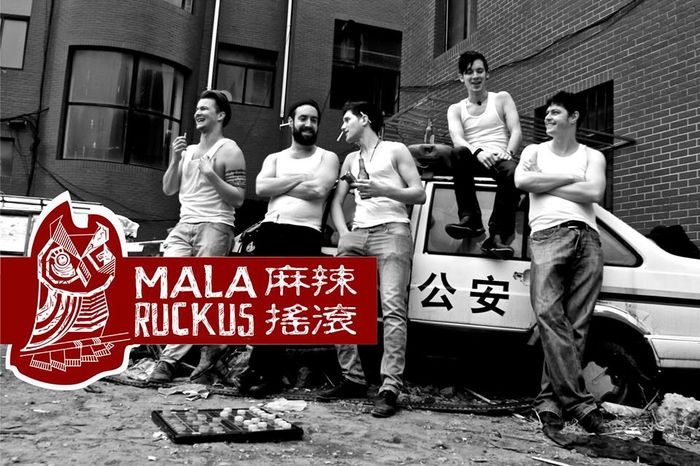 I first met lead singer Alex Montyro at the Jimmy Jazz (surprise) as Matt Weidinger put his guitar down at the end of his first set, Alex asked him if he could play a song.  Matt agreed, and Alex played his version of “Down in Mexico” by The Coasters.  I was transfixed at the sound, and style of his voice.  I introduced myself and offered him a spot on Underplayed & Underpaid, a radio show on CFRU.fm which I ran for years.  We’ve stayed in contact and he’s sent me updates on their struggles in  Dalian, China, moving to Prague after getting arrested, and then Madrid, Spain.  Their full length album has been released and Mala Ruckus is seeking to tour North America!  How can I help?  Now that I’ve listened to this roller-coaster, dynamic pop-rock album of awesomeness a few times, here’s my break down of their album, “People Mountain People Sea”…

The album kicks off with up-tempo “Run“, about Bobby, a less fortunate soul whose flighty attitude toward society is vocalized with a bouncy country bass line.  “Run” sets the tone for the album, echoing the band’s attitude through their departure from dictatorial China.   Bobby seems to be the personification of the whole band, and is the character we’ll follow throughout the album.

2nd Mala Ruckus cranks up the tempo for “Hoverboards” which was actually sent to me a couple of years ago, and I’ve been anticipating this album mostly because of this song!  Such inspirational lyrics about having the mindset of a maverick of your or any time, like:
“I should have been born in the 40‘s
Telling revolutionary stories
Passin’ hats in Greenwich bars
Swapping songs and comparing scars”

I love this song!

“Trees, Fields” cools the tempo a little bit and is a reflective ditty about missing home and family.  I can certainly identify with lyrics such as:
“The trees don’t know that I’ve been a wanderin’
The fields don’t know I’m home
My father seems to have lost a bit of something
My mother eats alone”

And the tempo and attitude picks back up and becomes light and flighty once more, reestablishing a feeling of self-confidence.

“Words” is a feel-good, country love song.  I very much dig.

“Sheets” begins with a vintage style commercial for mind-numbing pharmaceuticals and slips into a Rhythm and Poetry/R&B socio-political feeling about the seemingly cold nature of society, with kind words of wisdom to help lift sunken spirits.  I’d have very much benefited from listening to this in my mid/late teens. “Never been so cold between two sheets. ” resonates.

“East Hastings” blew me away.  How do these fellas come up with these instrumental ideas, and Alex Montyro nails poignant lyrics that compliment the sensational middle-eastern style beat?  Again, figure it out and tell 18 year old me.  That’d be great!   The transition to the hard-rock ending sounds like it fit so perfectly…

“Nowhere Bound” contrasts so nicely with a light, bubbly feeling, continuing the common denominator of lyrics reflecting on hitchhiking along a stream of consciousness of glass half-emptiness.   With instrumentation brimming with such positivity, it almost ridicules being of the “Have Not” nature.

“Take it Away” escapes the overall demeanor of the album and drops a jam-rock tune about sibling interaction.  Now I wish I wasn’t such a dick to my brother.  When it came to video games, that is.

“Beasts of Our Burden” was also sent to me awhile ago, but this socio-political slow-jam might just make you cry a little.  Maybe don’t try and sing along with it.  Triple doggy-dare you.  It’s really such a beautiful song, layered with violin and great vocals.  Like, seriously.  Watch this video:
https://youtu.be/vU9XJ7UOvso

“Fire” is the climax of the album, a heavy tune which beckons for end times.  Painting the picture of desolation and lengthy times of misery, “Set the world on fire!”  Bobby might say.

“Ghosts” is reminiscent of Celtic music with pedal-steel guitar, a somber beginning which slams into up-tempo pop-punk-rock with lyrics like:
“Sometimes you need to bleed out uncomfortably
Bathe in your own filth and breath in uncertainty
Take a few days on the cobblestone to remember the days broken and alone”

“Barmaid” is a beautiful jam-rock style love tune about a disinterested server who doesn’t reciprocate Bobby’s advances.  After speaking with Alex, he told me it’s actually a metaphor of the draw of your favourite watering hole’s escapism.  It’s a sweet end-cap to this international pop-rock album!  I’m lucky to be able to review it and I thank Mala Ruckus for the opportunity!

If given the right platform, this international music band could help shape the world.  A piece I will call a masterful display of musicianship and lyric writing/delivery.