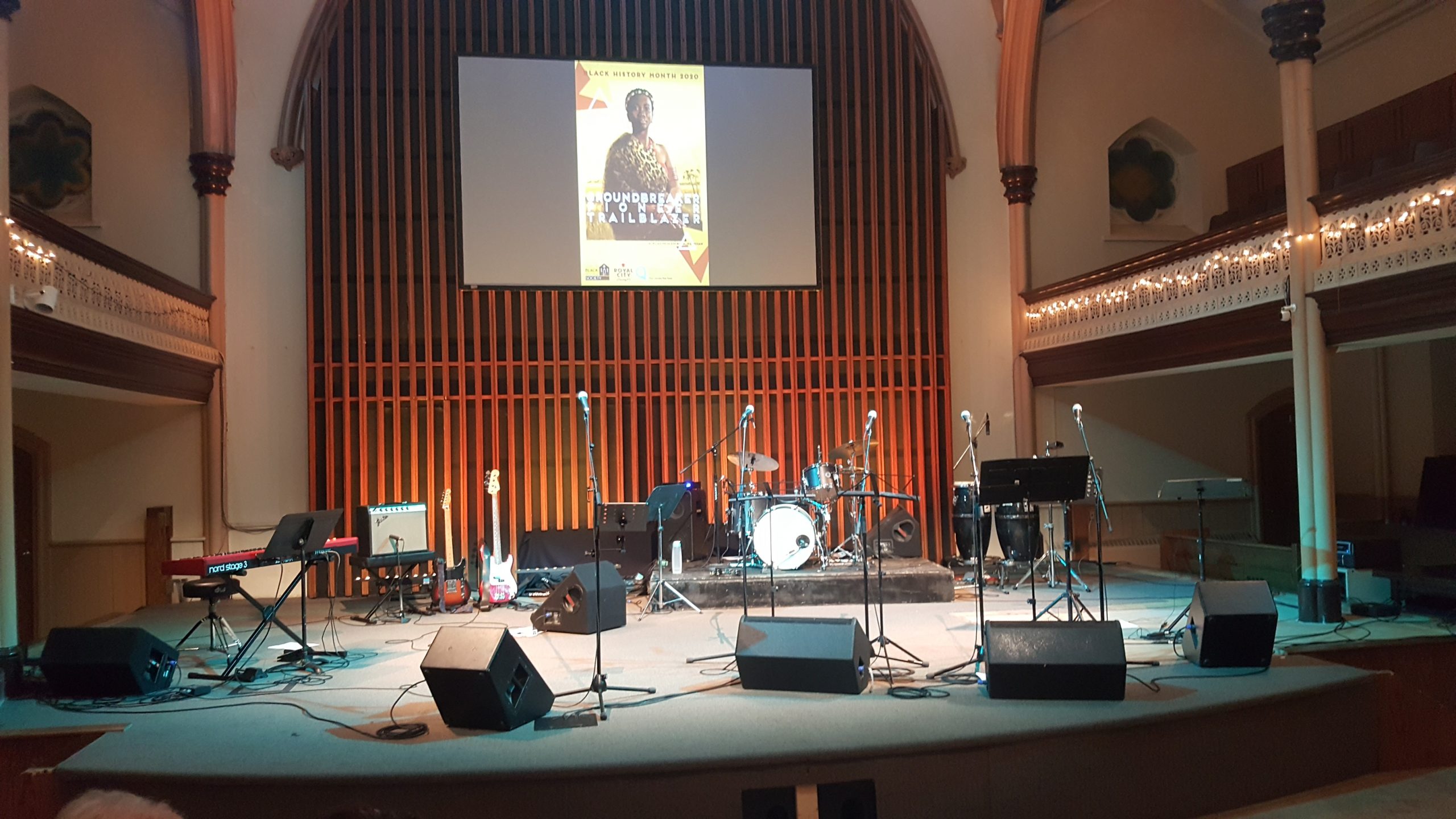 Royal City EMC is a beautiful venue with high ceilings and marvelous acoustics.  Their mezzanine wraps around 3/4 of the main room.   The Motown patrons were a great mix of various ages, cultures and backgrounds, whom had an exceptional.  Host Kerry-Ann Cornwall greeted the audience with a special mention to Native American tribes who used to live on the lands we now call home and expressed Guelph Black Heritage Society‘s solidarity with modern native plights.  The Motown Tribute show has become an annual fundraiser to provide financial aid to Black Heritage Hall.

Black Heritage Hall is in need of some accessibility upgrades and an informative video depicting the history of the church, was displayed to applause.  Guelph was one of the ends of the underground railroad and the area around Essex St. was home to many descendants of freed slaves whom had 83 Essex St. as their place of fellowship.  As the first night of Black History Month unfolded, everyone in the church was excited and the roster of Motown cover artists gave it their all. 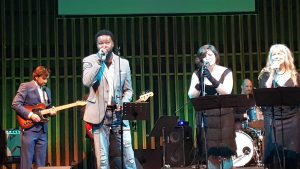 To start the night, Rufus John‘s tremendous  voice got the crowd moving with his cover of Marvin Gay’s “How Sweet It is“.  Jessie Bell Smyth followed with Elkie Brooks’ “He’s a Rebel“ and the fans loved it.  Jessie has been a long standing local favourite voice and I’ve seen her wow crowds on many stages over the years -she also lends her voice to The Skydiggers.

Nicolette Hoang stepped up and Stevie Wonder’s “Uptight“ and the crowd was grooving.  Alanna Gurr followed with another Stevie Wonder song, “Signed Sealed Delivered“ and the electricity of the Royal City EMC was almost palpable.  Jenny Mitchell channelled her inner Michael Jackson and covered The Temptations song “Who’s Lovin’ You“ and D’Eve Archer crushed the following tune, “Jealous Guy“, in Donny Hathaway‘s style of the John Lenon’s song.  The whole room was dancing, clapping and singing along.  Shouts of adoration rained down from the mezzanine between songs.

Up next was Brampton’s Savannah Taylor singing Billy Preston – “Nothing From Nothing“, followed by Transstar’s short monologue of being inspired as a child by “Love Child” by The Supremes and sang their heart out.  D’Eve Archer returned to the stage and sang Gladys Knight’s “Midnight Train to Georgia” and the crowd returned to their feet in adoration, while I tried not to seem too awestruck.

Alanna Gurr‘s playful demeanor fit perfectly as she performed Mary Wells’ “You Beat Me To the Punch”, and Bry Webb kept the Motown wheels rolling with Smokey Robinson & The Miracles – “Tears Of A Clown”.  Jessie Bell Smyth stepped back away from the backup singers to command “Too Many Fish in the Sea” by the Marvelettes and Rufus John did a heartwrenching performance of “Track of My Tears” by Smokey Robinson and the Miracles.

Steph Yates  sang the song Heat Wave by Martha Reeves & The Vandellas– and Tannis Slimmon finished the night with a powerful cover of Sir Duke by Stevie Wonder. (*Edit: Bryan initially forgot to include these two wonderful performances*)

I shouted out, “One more song!  As the applause from Rufus’s finale built into a synchronized swell, the full cast of singers returned to the stage and Bry Webb and D’Eve Archer executed “You’re All I Need to Get By” by Marvin Gaye and Tammy Terrell.  I took a video!

In writing this piece, I reached out to the Guelph Black Heritage Society and asked if they would be selling copies of the performance to further raise money to make the church more accessible and they responded saying they’ll let me know once they make a decision.  Exciting!

A special mention goes out to the band, who were exceptional.   Nathan Lawrn(Nathan Lawr and the Minotaurs) was tasked with assembling this list of musicians and singers, and he did a fantastic job.

This article wouldn’t be complete without a special shout out to Denise Francis, Marva Wisdom and John Leacock.  Thank you for all the wonderful things you do for the Black Heritage Society.
Leave a Comment
Click here to cancel reply.