Coming To Guelph: The Royal Streets on June 11th

Based out of Kitchener-Waterloo, Ontario, The Royal Streets have spent the last few years weaving their way through the Canadian folk-rock music scene. Following a stretch of eastern Canada touring in 2013, The Royal Streets released their debut studio effort, Kings & Queen, the following March with the help of Catherine North Studios in Hamilton and producer Dan Hosh. Throughout the summer and fall of last year, the band took their sound across Canada including performances at Osheaga in Montreal and Jasper Folk Festival in Alberta. The Royal Streets concluded the tour with the release of a 3-song EP titled Story Weekend.

Guelph will host The Royal Streets this Thursday at the eBar. We got a chance to chat with lead guitarist Eric Stirtzinger about life on the road, live shows, and recording their latest album. Hit play and read on!

Music Lives: How the music scene treating you over in Kitchener Waterloo? Do you feel there’s a different vibe between your home town and Guelph?

Eric Stirtzinger: The KW music scene had been very good to us over our two short years. We have some awesome fans in our hometown and have been able to play some great venues throughout Kitchener and Waterloo. The vibes I feel are fairly similar. Guelph may be a bit smaller then KW, but I’d consider both of them as a bit of a University town. And with that there is always a good buzz around the night life for shows. KW is rooted in a blues tradition which I sometimes feel is hard to mesh with at times as an original artist. While guelph is a bit more diverse. Both fun to play and supportive of indie bands. 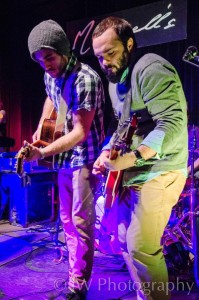 ML: Last summer was a busy time for The Royal Streets with touring and a new release! What have you been up to since then?

ES: Last summer was busy! Recently a lot of time has been spent writing. The foucs has shifted from touring and shows to new music. We are getting into pre production crunch time now to start tracking our second record come July. Then we will be in the studio for the remainder of summer and into the fall.

ML: You played Osheaga in Montreal and Jasper Folk Festival in Alberta, which are two amazing festivals. How does it feel to play festivals versus bar gigs? Do you have a preference?

ES: That’s a good question. I don’t know if I’ve played enough festivals yet to answer this question responsibly hah but I’m going to say I prefer festivals based on the experiences so far. Clubs are a blast and you can have some very special moments in a set in clubs. I’m going with festivals though because of the overall experience. Everyone there is there to listen to music, see favourite artist, have a good time and escape from the day to day life. I also have some of my own great memories from festivals and to be that band or have that set for someone else at a festival would be the coolest experience.

ML: Any great stories from the road to share?

ES: Ahh there are some great stories. My problem is I can never recall the best ones on demand. They some how need to be jogged back into my memory. We have done some crazy drives though. Two of our three east coast tours we did the 19 hour drive home, Halifax – KW, in one shot. And on our way home from the west coast tour last fall we did Winnipeg – KW in one shot. These van rides are always fun and being over tired makes those middle-of-no-where Saskatchewan gas stops maybe more enjoyable then they should be. One station had a wide selection of books from the 60’s and 70’s. Al decided to purchase a $1 fictional book titled “The Whore Mother” which he declared he would finish before the tour was over (not sure if he did, haha) ‎For these crazy drives Tour Dad Mike takes the grunt load of the driving like a champ. Haha, you can always tell its been a long nights drive with Mike at the wheel becuase the next time you get into the van and put on music its panned all the way to the left, and the balance is set to the very front. So the audio is only coming out his driver door speaker. Oh and its set to talk radio.

ML: Where can people find out more about The Royal Streets?

ES: We have a newly refreshed website for people to check out for new videos, updates on what we’ve been up to, shows and tickets, and buy merch! We are also on facebook and twitter (@theroyalstreets) and love to hear from fans on there.

Make sure to check out The Royal Streets playing with Ivory Hours this Thursday June 11th at the eBar. More details at http://musiclives.ca/event/fortnight-music-the-royal-streets-ivory-hours-ebar/