What an amazing show!
Patrons of Doogie’s are so fortunate to be able to be in awe of this music legend, the only performer working longer than the legendary Bruce Hare.   A spectacle, nay, an extravaganza of literally timeless hits written by the illustrious, one and only Butch Haller!

I entered the sticky floored venue to the original rockabilly “Hanging Tough” covered by NKOTB.  New Kids On The Block’s got nothing on ol’ Butch. That’s how the night started.
My first glass of beer seemed miniature compared to the magnitude of talent on stage, and also my hand.  The barkeep guessed it was 18 ounces?  When I brought some patrons in from afar, I ordered a pint of Steamwhistle and bartender gave me a pitcher. We’re scene veterans so we bought it with a sly eye and a big tip.  It was cold and accompanied the festivity wonderfully.
“Spin me Right Round” was the next original Butch Haller song played. “That’s the round and round song I wrote on the toilet” he stated upon finishing his rockabilly masterpiece.
People were filling in to Doogie’s from the Pablo’s arcade side like crabs in a bucket!
Super tight band, Butch Haller and His Chesterfield Ramblers, bouncing upright bass guitar and sharp punchy drums. Butch Haller can really rip those blues scales!  Boones Mill Virginia is still seeping out of his bones for our enjoyment.

The crowd really loves to dance to Butch’s tunes.  I don’t think they can grasp the magnitude of this show.  He played a song which Jason Derulo covered called “Wiggle” and the crowd went wild.
Butch then commanded , “We’re gonna take a quick break and I’m gonna clean out my colostomy bag, she’s bustin'”
Then he brought his song which Whitney Houston covered “I wanna dance with somebody.”
I’m surprised Butch works with a kid on drums who vapes, but he’s a soldier who’s survived the music scene this long; I’m sure a vape pen pales in comparison to his poop bag and various other 93 year old ailments.
2nd set started with Destiny’s Child cover, and then Britney Spears cover of his orignal “Baby Baby”… So much fun and electricity!  “99 Problems” was the next original.  And I quote, “This next song was stolen from me by a Welshman who was a cock-eye. “You know what that is right? A guy who’s looking at you with one eye and with the other he’s lookin’ at your cock.”  They then played “Freak” covered by Radiohead , “Hound dog” covered by Elvis, “who’d be 97, and a 5000 pound asshole”…  by then the ladies in the crowd were well lubricated and getting sloppy wild.  “Sweet Dreams” covered by Marylin Manson was played and the crowd went feral.  Totally uncultivated.
Anthony Damiao and his uncle Jim were captivated.  Butch Haller kept saying he was taking a break, taking the stairway to Kevin, then played an original cut that Jimi Hendrix covered.
Set 3 started with the song The Stones covered, “Turn it Black” and I lost my marbles.  That’s when I stopped writing.  I had to just soak in the staggering, stupendous awesomeness of it all. Too much fun was had.  I hope I get to see Butch again before he’s taken from this sweet, sweet planet.
What a real gem. 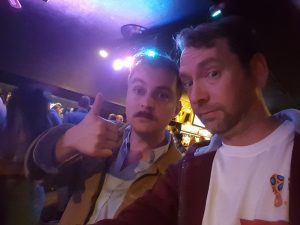