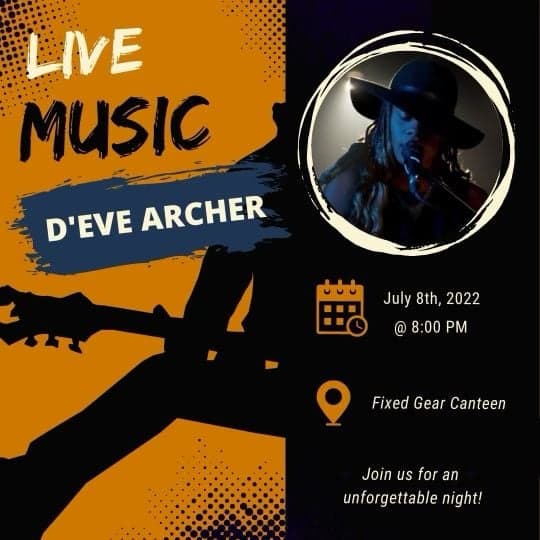 Never staying in one physical location for very long, D’eve Archer has found her home on stage. Blending musical elements of her Jamaican heritage, with her small town Canadian upbringing, all shaped by a classical training in music, she brings her audiences a seamless blend of musical styles, instrumentations and deliveries all tied together with her undeniable and infectious energy. The kind of energy that easily owns a room, and no matter the size of that room, you’ll feel like she is talking and singing right to you.

D’eve Archer was born into a musical family, where both of her parents not only had experience with playing the piano and singing back in Jamaica, but also directed her focus toward importance of having music in her everyday life.  While growing up in Woodstock ON., at the age of 6 she began to discover the joys of playing the piano and trained through the Royal Conservatory of Music. Although classically trained, D’eve was drawn to the sounds of Jazz, R&B, Soul and Hip Hop.  By the age of 12, her first song was composed, which has now turned into a library of over 100 completed songs, along with a vast amount of lyrical compositions.  In order to advance her in compositional techniques, and musicianship, D Eve also picked up the bass, trumpet, and drums, which propelled her into some of the most important stages of her musical career up to that period.

In 2014, D’eve completed her Ep creating new sounds that are more edgy, raw, and filled with soul.  The darker tones and her ominous lyrical content are supported by heavy rock-filled guitar, bass and banjo progressions played by Mr. Adrian Raso the ‘Don’ of gypsy jazz guitar (www.adrianraso.net).  The complex production of this Ep lies in the hands of world renowned ‘Tone Guru’ and producer Mr. Nick Blagona, best known for his work with The Beegeez and various artists such as Dizzie Gillespie, Tom Jones, Cat Stevens and The Police.

These experiences have pushed D’eve to dedicate the rest of her days focusing on writing, playing, singing and travelling. Currently D’eve has managed to reach out and touch down in various countries all over the world sharing her talent and leaving her audience hungry for more.  When describing the solo sounds of D’eve Archer, many are not only impressed by her diversity with instrumentation, but are amazed by her techniques to fuse multiple genres together to make harmonious sounds that will leave you wanting more. In her own words D’eve goes on to describe her music;

“It’s not just about what you are playing for your audience, it’s about what you are giving them. Every time I step on stage, whether it be in a large arena, or a small intimate lounge, I aim to share my heart, my mind, and my soul with everyone in that venue.

Please take the time to sign up for her email list to keep up to date on recent news.

Enjoy the sounds of D’eve Archer.