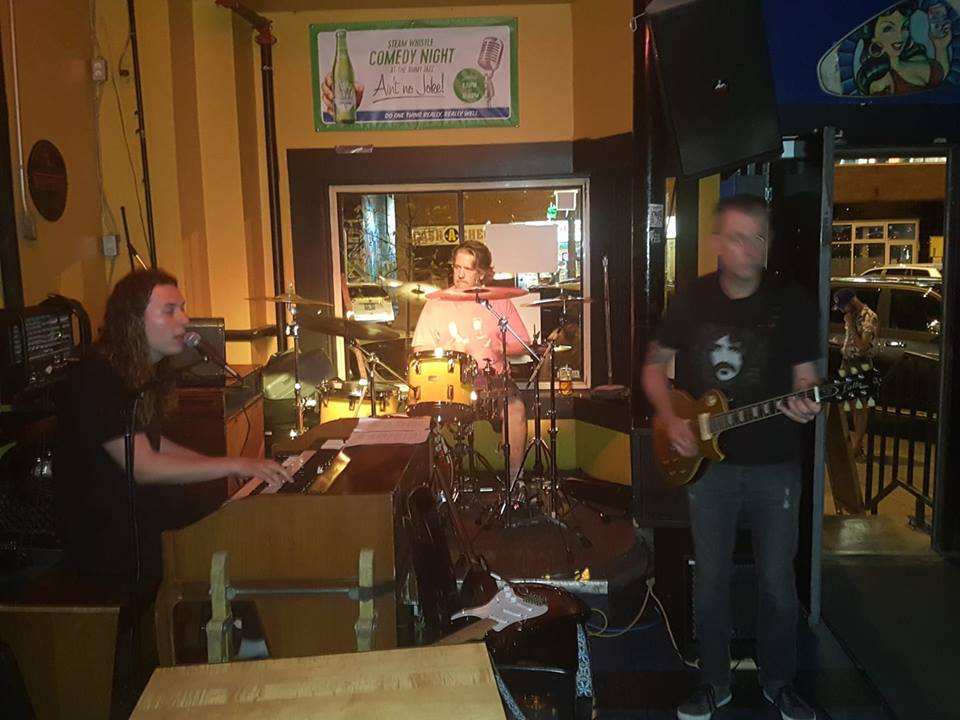 What a Blues-Rock treat!!!

Unfortunately it was on such short notice, because these 3 guys are monsters in the tri-city music scene.  The dynamic rock sound of the classic age that these guys encapsulate is astounding. The big sound grooves are mouthwatering.  Taylor Kerr of Crown & Jester and his girlfriend rocked out and screamed.  People around me marveled in the Deep Purple era musicianship awesomeness  and were captivated.

I was surprised they started so early as the Jazz doesn’t usually fill up until later into the soiree.  Then I found out they were doing 3 full sets!  Gord Stevenson looked like his body runs on auto while he watched Matt for tempo tweaks on emotional groove bits.  A smooth drummer and according to Paul Macleod one of the best song writers around.  Although he forgot his drum stool, he killed percussion on a bar chair!

Chris Latta‘s guitar tones are amazing.  A million years of work pays off and he barely looks 39 again.  His masterful control of all things guitar power the covered tunes like you were listening to the original, laying on a couch with big headphones on.

Matt Weidinger, keyboard phenom can hang and bang with the big boys.  Mellow Tenor sax timbre pitch perfect vocals His organ, a 1963 Hammond Wurlitzer A100 with A Leslie speaker that has a horn in it, has a spread of foot petals which play the lower key register.  Basically he played bass keys with his feet, while ripping 2 levels of keys and singing his brains out.  This kid is a keyboard dynamo!   The sound of this instrument adds so much familiar rock ‘n’ roll depth and warmth.  Watching his mic control is also a straight-up lesson.  I miss Matt playing at the jazz and wish it happened more often.  I have a strong feeling it will!

The first set went something like this, to give you a understanding of what most people missed:
Rolling Stones
Traffic
THE BAND
The Kinks
Allman Brothers
Bob Dylan
Jimmy Hendrix (Manic Depression was my highlight of the first set!  So tight!)
Crosby Stills Nash
Cover of Joe Cocker covering Abbey Road
Deep Purple

The 2nd set opened with a super powerful Allman brothers song with an ambient groove, shifted into a powerful, chunky groove, and then more groove.  They groove so groovy man.  The songs you hear are sometimes b-sides where you’d have to be a full album listener to recognize the depth of the artist’s music this Trio covers.  Power.  Smoke.  Lights. Groove Sweaty Shirt.  Precision.  Awesome.  They started to turn it up and Matt told me I’ll love the progression.  The cover “How do you sleep” by John Lennon was so intense!  It’s amazing Matt Weidinger can sing with so much power all night long.  If they played the Jimmy Jazz Guelph September- May, the students would be blown away.
Keep your eyes on our calendar for the Latta Dinger Trio returning to Guelph!