The Lifers live review by Dana from Underplayed & Underpaid 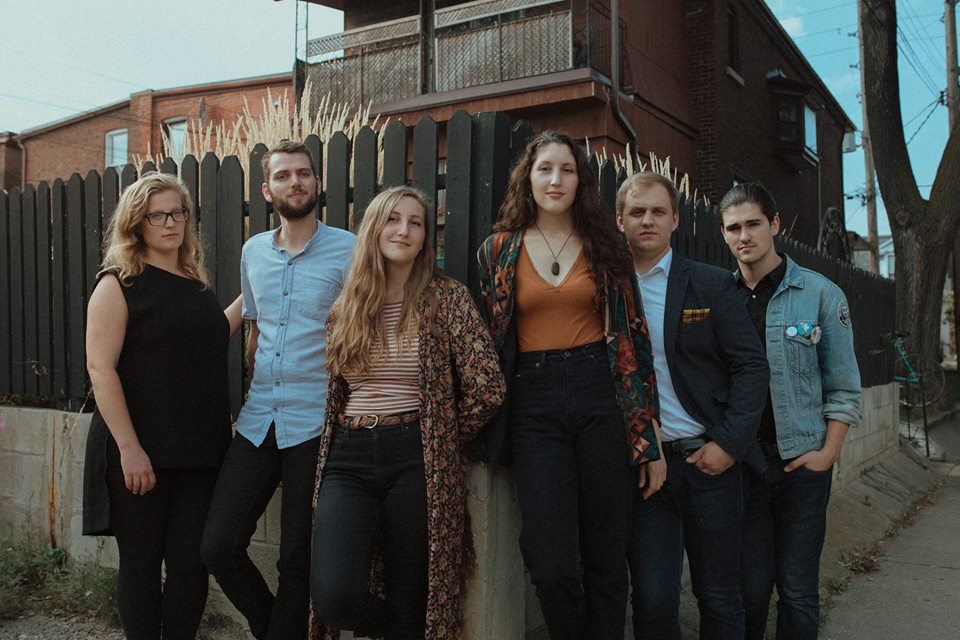 This is the first review of any kind that I’ve written for Music Lives. Hey, I’m Dana. Last night I went to a show and now I’m going to write about it, I guess. I have a tendency to say more than I need to, but I’ll really try not to overdo it.

To celebrate yesterday’s release of their new album, “Honey Suite,” The Lifers threw a concert bash with their entire “folkestra” of 12 talented musicians, as well as Annie Sumi who began the festivities warmly with her own tunes. The show was the starting point of their now-in-motion tour, named “The Sisterhood of Sound Tour,” which will take them across Ontario and Eastern Canada, and through USA and Europe until mid-July.

The venue, the Royal City EMC on Quebec St., was the perfect venue to host this dreamy duo. With white sheets veiled across the stage and hung behind the performers, and bouquets of flowers standing beneath high-strung twinkling lights, the performance gave me an incredibly cozy feeling through its aesthetically pleasing display. The volunteers of the venue were very kind and hospitable, helping with ticket and merchandise sales, and the church itself is gorgeous. It felt very pleasant and intimate to be in a sacred space with women singing their praise to life itself. The energy was very positive and kind.

Tickets were $20/PWYC, and the evening was packed with concert essentials, like a food and drink station, a merch table, and readily available information about the band’s partners for the event: Hillside’s Girls & Guitars program, CFRU 93.3 FM and the Grand River Conservation Foundation (GRCF). From this list you can gather what is most important to the artists. A portion of the sales will go to fund the availability of terrariums, aquariums and other homes for the creatures of the Nature Centre at Guelph Lake. The urge to shift from an attitude of complacency to action was expressed in the contexts of gender equality, mental health and the environment by The Lifers’ front-women Liv and Anita, alongside Annie Sumi, and several of their closest supporters.
One really cool thing I’d like to mention, also, is that the dairy-free, soy-free, gluten-free cupcakes that were available for purchase were interchangeably topped with honey comb, or sweet potato…. Get it? Honey… Sweet…? Nice. Additionally, all of the shirts that were sold were purchased secondhand and then printed upon, to more practically express their dedication to the improvement of attitudes toward the environment. I was impressed by all of this.

And now, for the music:
Annie Sumi is described online as an “ethereal writer with a voice that expresses the strength and kindness of the wind.” She has a new album, “In The Unknown,” which she has made known through appearances across Canada, on CBC, and community radio. In a separate folk-jazz quartet project, The Hidden Roots Collective, she has received nomination for a Canadian Folk Music award. To read more about her on her website, click here
http://www.anniesumi.com/newsite/

Her opening performance was beautiful. She appeared barefoot, between Liv and Anita accompanying her with a guitar, an accordion, various modes of percussion, and sweet, calculated harmonies. Behind them was Jill, the cellist of The Lifers, to draw everything together solemnly and beautifully. Performing 8 original songs, some with and without other performers, her dreamy, windy voice told lyrical stories of the prayers embedded in nature, walking through cities at night, and the beauty of the little things that help one “Get By.” In impressive depth, her lyrically dominant verses paired with sweet, strong harmonies made me feel fuzzy. The energy between all performers on stage during her set was very warm and tingly. Also, she has a killer voice. I enjoyed her performance thoroughly.

The Lifers are described by their website as “an art-folk/rock collective,” with dynamic “vulnerability and strength.” You can read more about them from their website here http://www.thelifersmusic.com/   While “Honey Suite” features 12 musicians, the group is typically a bit smaller during live performances. This album release, however, is the only time that all 12 members have been on stage together, and the energy was awakening. At one time during mid-set banter, it was said that this was the most fun they had ever had, and that it seems to get better when more of the band is present. Some of their Sisterhood of Sound tour dates will feature the 6 core members, and some will be performed solely by Liv and Anita.

Prior to the beginning of their first chorus, it felt as if the whole room was going to explode in anticipation. I could feel the excitement of the whole folkestra being on stage, finally ready to showcase their hard work on Honey Suite. Liv and Anita had reemerged in similar all-white outfits, as if the purity of their music had manifest externally. What is also pure about their performance style is how the front-women interact with each other non-verbally while playing; the way that they look at each other is both intriguing and calming. Their songs are at times thunderous and roaring, yet spaces are given between heavier breakdowns to hear two strong voices become one and circle to fill the whole church’s space. I tried my best to count the assortment of instruments used, though I wasn’t able to see the entire ensemble from my seat. I counted 16 (someone please let me know how I did,) but the way everything blended together made it comfortably challenging to hear performers individually. It was a beautiful togetherness, orchestral and lush. The rich and warm timbre of their general sound is signature to folk music, which they totally nailed, yet the eeriness of other songs created a new kind of warmth, in dissonance and airiness. It’s an eerie airiness, like the happiest little ghosts soaring through the wind into my heart through my ears. After the album was played through, a few classics were played, and I enjoyed myself during those, as well. The violin always makes me want to dance.

The band left the stage after a high-energy reminder of their fans’ favourite songs, but came back for their thank-you acknowledgements, and a special birthday message for Liv and Anita’s mother on her birthday. To finish the show, the audience was taught a sweet chorus and was asked to sing it with all of the performers on stage, backed by a steady yet twinkling ukelele riff. It was a cathartic experience and I generally can’t keep myself together during beautiful community engagement experiences like that, but it was amazing. It appeared to me as excellent showmanship, to include the audience like that. What a way to end a show.

I had a really pleasant time at this event. Now that I’ve heard the entirety of “Honey Suite” through, I thoroughly recommend it. It was a beautiful experience to have heard it live. Congratulations to The Lifers for their success at this release. I’m thankful to have been there.