Vienna D’Amato Hall is an American/Canadian singer-songwriter. She began her musical career in New York City in early 2014 where she wrote, recorded and self-released her debut album, “It’s What the Dog Saw.” (2015)

Vienna’s musical interests were first inspired by traditional, American folk songs when she acquired an old cassette tape of her late grandmother singing such songs as: “You Got Me Singing the Blues”, and “Hush Hush Sweet Charlotte”. She was inspired to re-interpret these songs as an homage to Bernice and released the EP, “Songs From the Land”, in May 2014.

During the making of her debut album,”It’s What The Dog Saw”, and with Andre Fratto as producer at the helm, she incorporated electric elements into her sound, resulting in bold and lyrical story telling with a dynamic and modern production.

She since has been touring in the US and Canada and is in pre-production for her second album.Vienna visits Guelph on July 22nd, playing with Raine Hamilton at the Red Brick Cafe. Check here for more details, then hit play and read on!

Music Lives: I noticed a lot of strong storytelling in your lyrics. What inspires you to write? Where does the storytelling come from? When you’re writing new music, is there a process that you follow?

Vienna D’Amato Hall: Writing songs has become the way that I have been able to attempt to make sense of things. At this point, it’s like a mirror confirming what I know and admittedly don’t, what I’ve learned about strength and weakness, how we can all be similar, or in certain cases, absolutely distanced. I am inspired to write when someone, or some scientific concept, or the way I interpret the moon that particular night, makes my version of the world shift by a hair. That’s when I need to start writing. I want to try to document these feelings. All of the story telling has a certain mix of fictitious and autobiographical content. The percentages shift with each song, but that is always the case. 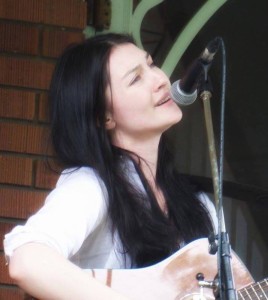 I’m currently writing my second album. There are a few songs that just come. That’s a real gift. For those songs that require time, I do follow a process. I simply approach the subject in question with a sort of free association, then I’ll let the monologue incubate for 3 days or so, at which point i’ll edit like mad so that I can get to the bone of what I’d like to say. What do you find is the biggest difference in your music between the album and playing live?

Well, I’m touring these songs solo, but the album is bursting with Keith Moon-esque drumming, electric slide guitars, Gregorian chanting, and there’s some really cool production tricks in there. For Example, in “Dear Child,” the kick drum is substituted by the sound of a creaking door slamming shut over and over again. Andre Fratto is the brain behind the production. He is absolutely phenomenal and really got to know these songs and gave them a rebirth. You can feel the force of some of the emotions without even listening to the words. Thus, It wasn’t until the album was complete that I fully realized the true nature of what I had written.

On the other hand, playing these songs live gives them a really special quality. The songs become naked again. It is my guitar and a few pedals here and there, but ultimately, it’s the words. The veil is lifted and so it’s all much more vulnerable.

ML: I’ve seen you listed as American/Canadian – what part of both countries do you call home?

VDH: That’s correct! I was born in Kitchener-Waterloo, Ontario. When I was 18, I moved to New York City and lived there, exclusively, for 6 years. As of this winter, I have been moving back and forth a lot.

ML: Congrats on the release of “It’s What The Dog Saw”. What’s your favourite part of recording? Least favourite?

VDH: Thank you very much. “It’s What The Dog Saw” is my debut album, so it was a very long and intensive process. There is such a focus when one is recording. You don’t want to break away. Sleep becomes an annoyance. It’s brilliant to be that engaged in something. Perhaps the thing I like the most is also the thing I enjoy the least. I am so introverted and so focused on the work during this time that I don’t tend to my real life. When it inevitably comes screeching to my attention, I find that I have to ease back into things properly or else I feel slightly lost for a time.

ML: Where can people go to learn more about you?

VDH: My Bio and all of the upcoming shows are on my website. We would also love for you to keep in touch on Facebook: www.facebook.com/viennadamatohallmusic

Make sure to check out Vienna when she visits The Red Brick Cafe this week: https://musiclives.ca/event/raine-hamilton-vienna-hall-live-red-brick/